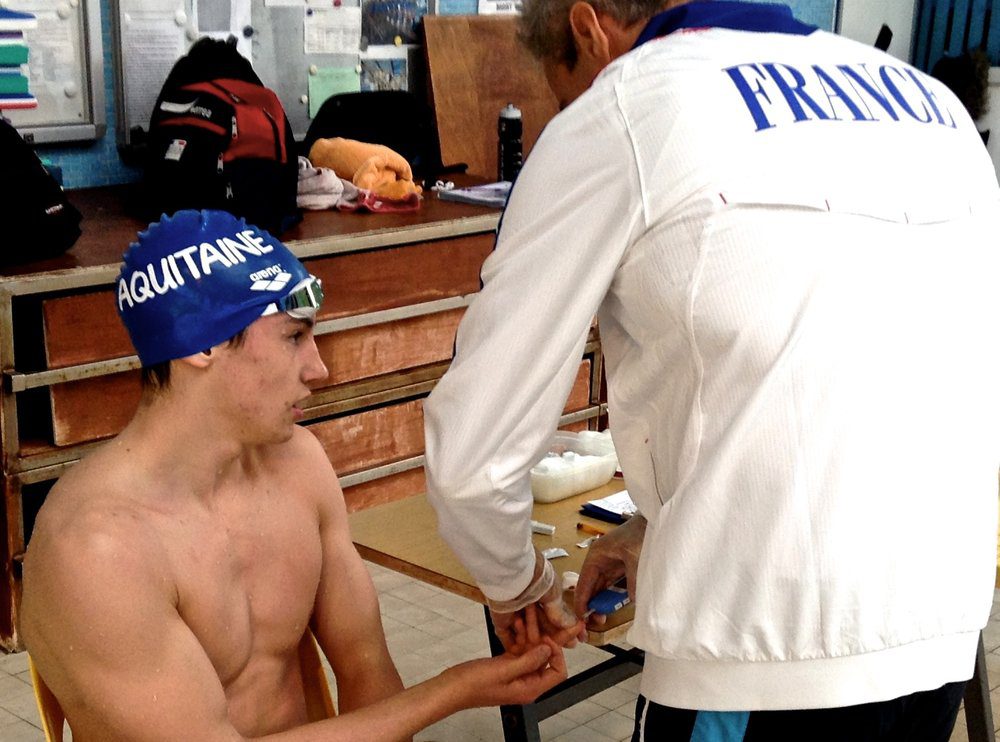 We don’t need to start from scratch and explain that there are three metabolic pathways that contribute to the production of power in swimming (as in any other sport). The creatine-phosphate and the glucose breakdown (the anaerobic system that transform glucose into pyruvate/lactate), and finally the combustion of O2 (aerobic metabolism) are always working together at the same time in different percentages and provide the body with energy in form of ATP molecules.

The peculiarity of swimming – which makes performance analysis also very complex – is that because of the relatively short duration of the races, all the three energy systems contribute to the power production and the overall performance of the athlete. And because of the short durations, in every single swim race the anaerobic energy production plays a huge and significant role.

When and why it matters

It goes without saying that for events lasting less than two minutes, the aerobic power – assessed as VO2max – provides the majority of the power and therefore is of utmost importance. However, the VO2max alone is not the differentiator that separates the wheat from the chaff. So, how much can you actually change it in training and how does it relate to the other metabolic metrics?

VO2max is a very well known metric. We use VO2max for a simple reason: each molecule of oxygen taken into the muscles is used for energy production. It isn’t easy to measure energy production itself. But, as the amount of aerobically produced energy is absolutely proportional to the oxygen consumption rate, VO2 is a valid marker to assess and quantify the ability of an athlete to produce energy (or ATP if you want to put it in a scientific way) aerobically.

Let’s open up a textbook of biochemistry for a second: during the glycolysis (anaerobic pathway) energy – ATP – is also produced. And with each molecule of ATP produced there’s also a production of pyruvate or lactate (these two are held in equilibrium). Therefore, the ability to produce lactate is a valid marker to assess and quantify the anaerobic – or, more precisely – the glycolytic power of an athlete. Together with each molecule of lactate that is produced, there is also an amount of energy (ATP) that goes with it.

We could also use pyruvate or Fructose 1,6-diphosphate (another substrate that is produced during the breakdown of glucose into lactate) as a marker to quantify the glycolytic energy production. But the cool thing about lactate is that it is relatively easy to be assessed: we can just order a simple lactate meter on the internet for a few hundred dollars, prick the earlobe of our swimmer and measure it.

You may have experienced this: your prescribe a certain training program to increase the performance of your swimmers in a 100m freestyle race, and you see the times improving – second by second. Well, firstly, congratulations, well done! Now, wouldn’t it be nice to understand why this has happened? What has caused the increase in performance and therefore reduced the times? Maybe it was an improvement in their technique; or maybe they were able to execute faster flip turns; or probably they improved their drag in the water. But maybe it is also, or only, the increase of the anaerobic power of your swimmer …

Fig 3: Energy contribution of an Olympic champion during a 200m freestyle race.

Another example: maybe you coach several swimmers; and two or more of them are swimming similar times for the 100m and/or the 200m freestyle (or any other length and discipline). Analyzing and comparing their glycolytic power will enable you to better understand how these similar performances are generated. You can bet you will see significant different glycolytic powers within your training group – even for athletes who show the same performance outcome and times in a specific event. One swimmer may have a very high glycolytic power, and another a significant lower one. You herby just started to discover how to fine-tune the training programs for those athletes: the one with the high glycolytic power may benefit most from working on other aspects of this/her the performance (aerobic system, technique, turns, etc.). On the other hand, the athletes with the lower glycolytic power may benefit a lot more from improving their anaerobic energy production.