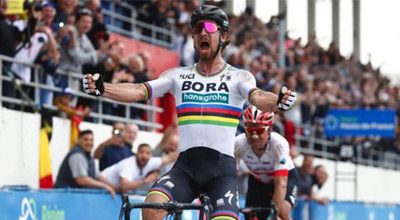 Are you a cyclist looking to sprint faster than Wout van Aert? Or a triathlete dreaming of racing with Jan Frodeno at the next Ironman World Championships? These may be hard goals, but a good way to start working towards them is to understand a very important metric of human performance: VLamax. Because during both of these kinds of efforts, VLamax plays a crucial role.

Never heard of VLamax and this all sounds like blasphemy to you? Read on and you’ll understand.

What is VLamax & VLamax definition

VLamax stands for the maximum production rate of lactate in your muscles (V=flux, La= lactate, max= maximum). Because the amount of energy produced in the glycolysis is proportional to the amount of lactate produced, VLamax is a good way to measure glycolytic power (the power produced through glycolysis).

Sometimes VLamax is best understood by comparing it with its well-known brother: VO2max.

VO2max is about the maximum oxygen uptake. This is proportional to the amount of energy (or power) produced aerobically. Therefore, VO2max is a valid marker of the aerobic energy system performance.

VLamax is about the maximum lactate production rate. This is proportional to the amount of energy (or power) produced anaerobically via the glycolysis. Therefore, VLamax is a valid marker of the anaerobic (glycolytic) energy system performance.

VLamax test: how to measure VLamax

There is no such thing as a VLamax calculator based on certain efforts. To get an accurate VLamax, there are two VLamax test protocols: one that includes a 15 second sprint and one that includes several sub-maximal tests.

INSCYD is the only tool that provides you a scientifically validated VLamax (=glycolytic power). It also allows you to understand how your VLamax influence your performance and what your optimal VLamax is.

The INSCYD VLamax test can be performed in a lab environment, but you can also do a VLamax field test and even a remote VLamax Zwift test. For more information, use the buttons:

VLamax training: How to train VLamax

The question about “how to train VLamax” is a bit more difficult than “how to train VO2max”. Why? Because a high VLamax has both advantages and disadvantages. An advantage of a high VLamax is that you can quickly generate speed and power. A disadvantage of a high VLamax is that you will burn more carbohydrates at any given intensity. Those are two examples of why both increasing VLamax and decreasing VLamax could potentially benefit performance, depending on the race demands.

How to increase VLamax

If you want to increase your VLamax, start by making sure you do nothing that decreases VLamax. Next, think about short VLamax intervals like sprint training with a lot of recovery in between intervals. Strength training could also be a part of your VLamax trainingplan. Learn all the details via our INSCYD Education.

How to decrease VLamax

Even though VLamax is a marker for an energy system, we often receive questions about “how to lower VLamax”. Reducing VLamax often comes down to making sure glycolytic muscle fibers fatigue, and therefore become more aerobic. Athletes who want a personal VLamax trainingplan can reach out to our INSCYD coaches. Coaches who want to know all the details can find all they need to know on our INSCYD Education platform.

Sprinters need a lot of energy very quickly. Let’s look at a sprinter going flat-out at the end of a cycling stage. This kind of effort lasts for approximately 12 seconds. In this case, the human body needs a lot of energy, and it needs it very quickly. For such short, tough efforts, a high-energy production in a small amount of time is needed.

In these kind of events (performed at low intensities for a very long time), a different energy production system takes place. It is called the aerobic pathway (another fancy word for saying “with oxygen”) and in this process, energy is produced using oxygen, fatty acids and lactate as the main fuels.

The glycolysis (or the glycolytic process) is in fact at work within the human metabolism also when an athlete is working-out at lower intensities. Therefore, the more your body activates the glycolytic process, the more it burns carbohydrates during the exercise and this will trigger a higher lactate production (so, a higher VLamax too). On the other hand, if your VLamax is lower, it means that also your glycolytic system is less active and your body burns less carbs. And carbs are a such precious fuel you want to save as much as possible during endurance events: because if in long events you mainly burn carbs, then you also burn less fat. And that is a shame, because not only is fat very rich in energy and it contains roughly 9 kcal per every gram (against the approx. 4 kcal per gram of the carbs), but its storage is virtually infinite – whilst the carbohydrate one is limited.

About FatMax and VLamax: fat and carbohydrate combustion

Finally, it doesn’t matter if you’re Wout van Aert or Jan Frodeno. In both cases – but especially in your case – basing your training on VLamax will bring your performances to peaks they’ve never reached before.

Want to learn more? Get our whitepaper on VLamax – for free here