Going sub-5 for the bike leg of an Ironman is a true milestone. Getting even faster after this benchmark is clearly harder, but not impossible. Just look at age–grouper Matthew McCutchen (47) from Aliso Viejo, California.

McCutchen – a married stay-at-home dad with two kids – improved his Ironman bike split by more than 10 minutes in just 12 months. He started to work with triathlon coach Joby Gutierrez of FC Endurance (an INSCYD licensed coach based in Orange County, California) in 2014 after a year off from racing. Since then he has qualified for the Ironman World Championships three times in a row: in 2015, 2016 and 2017 (with a fourth qualification back in 2012 when he was used to train with Purple Patch).

If you’ve read something about this year’s IM Texas, and look at the McCutchen’s bike split, you may be tempted to think “oh, yeah, but IM Texas this year was cursed with a huge drafting problem!”. That is why you should also look at his power file in order to have a full picture of his performance.

If you look at the watts that McCutchen averaged in both circumstances, you get a better insight into his race day achievement. Last year McCutchen completed the IM Texas course with a normalized power of 221 watts, while this year his normalized power was 231 watts. That’s exactly 10 watts more this year. That is a big improvement and it should be read as: the 2018 faster bike split came from his own body and not from drafting (otherwise the wattage would have been lower). And there’s no doubt that the use of INSCYD over the last eight months gave his coach an extra and powerful tool to boost his performance. 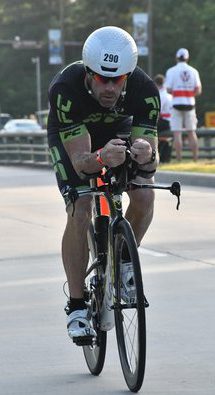 Joby Gutierrez started to use INSCYD (both on himself and on his athletes) in September 2017. He tested McCutchen with a Critical Power protocol 18th  September, a little less than a month before the Ironman World Championships, which was held 14 October. McCutchen had qualified for his first World Championships at the now-defunct Ironman New York (2012) and back-to-back at Ironman Texas for the 2015, 2016 and 2017 editions of the IM World Champs. From 2015 he averaged 13 hours of training per week.

In the first test performed in September, McCutchen (117 cm for 76 kg) showed a pretty high VO2max for an age grouper (58 ml/min/kg). Giving the results he already achieved through his triathlon career (he completed his first race, an Olympic distance, in Los Angeles in 1995), that was no surprise. His VLamax, on the other hand, was a bit high (0.45 mmol/l/s); therefore, in order to perform in endurance events at his full capacity and improve even at an already high level, the main goal for Gutierrez was to lower VLamax.

Coach Gutierrez: “My goal for Texas was to keep the VO2max at the same level and just lower the VLamax. So I modified some of his training to achieve that. And that brought him from 0.45 to 0.25 which at his race intensity allowed him to be less dependent on additional carbohydrates.”

As in all competitions lasting several hours, one limiting factor is nutrition, specifically the amount of carbohydrates one could take in during race.

The new training schedule that Gutierrez planned after McCutchen’s first test in September targeted a specific reduction in carb combustion. McCutchen utilized 415 kcal carbohydrates per hour in September 2017 at the given power output of 230 watts. This equals 99 gram of carbohydrates per hour. The second test – performed in March 2018 – showed a total utilization of 324 kcal/h (equal to 77.5 g/h) at the same power output. In other words, he needed less carbohydrates for the same amount of power.

At the same time, McCutchen improved his ability to use fats as a fuel, going from 425 kcal/h up to 561 kcal/h during the same tests and at the same power output. With the combination of the improved use of fats and the reduced use of carbs, his stomach distress was resolved and his ability to stay in the FatMax/aerobic zone improved over the course of only 3 months. Although McCutchen was first tested in September, raced in Kona in October and also in Ironman Arizona in November, he then had an off-season until the end of December and started the new training structure in January.

How they reduced VLamax

In between, a little re-tune of his “grinder routine” after the first INSCYD test was the way to reduce his VLamax. “Big-gear work has always been a big part of his training,” says Gutierrez. “But I reduced the amount of big-gear workout above threshold intensity, and I reduced the intensity of his big-gear work closer to his threshold. I wanted his big-gear work stay at around steady-state and not increasing the accumulation of his lactate. But we also did big-gear work at the upper-end of his Fat-Max zone with longer duration (15-20 minutes). We also made sure that on his weekend rides he wasn’t going anaerobic in any of his effort. And if it was, it was very short in duration.”

Do you want to know more about your VLamax and how to reduce it and perform better in long-distance events? Start training for real, start using INSCYD!

Joby Gutierrez started to use INSCYD (both on himself and on his athletes) in September 2017. Joby takes a unique approach to training – preparing athletes for the physical endurance and mental perseverance needed to excel. Learn more about Joby and his work here: FC Endurance